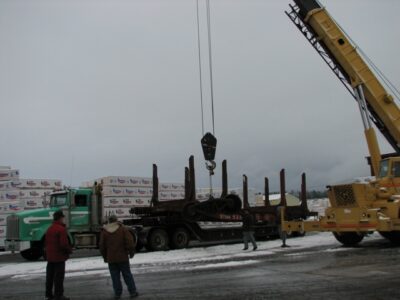 HPG member Rolland Meyers lives in the Bay Area of California. He’s definitely a fan of the WI&M, but his “true love” is the Milwaukee Road’s Elk River branch now owned by the St. Maries River Railroad. Rolland took the news hard when he learned in the fall of 2009 that the STMA was abandoning the entire Elk River line. It was clear to everyone that this was purely a business decision on the part of Potlatch Corp., but that didn’t make it hurt any less.

Then Rolland learned the STMA planned to scrap its entire fleet of former Milwaukee log cars, and that added insult to injury. So, he decided to do something about it. Rolland was in no position to change Potlatch Corp’s mind about the abandonment, but maybe he could convince them to preserve one of the log cars. That’s when he made a phone call.

Actually, it took a bunch of calls. Rolland’s plan was to get Potlatch Corporation to donate a car to the WI&M HPG and then get it moved from St. Maries to Potlatch for storage on the track behind the depot. After Potlatch’s Public Affairs VP Mark Benson agreed to consider a donation, he gave Rolland a narrow window to arrange for taking possession of, and removing, the car from St. Maries. Rolland quickly contacted two veteran “git-er-done” guys in the HPG, Don Somers and Jim West, who made arrangements with Jack Buell Trucking to provide transportation for the log flat: One truck for the log car itself, and a second truck for the freight trucks. When Rolland and Mark Benson next spoke, Rolland had a plan in place, and he soon received a verbal agreement from Mark to donate the car.

Stan Patterson, of the Washington & Idaho Railroad, suggested the log car be trucked to Bennett Lumber Products (BLPI) for re-assembly. Then his W & I train could move the log car to the Potlatch house track. So, Jim got in touch with Bob Jahns at BLPI, who not only gave permission for unloading the 533 at their mill, but also offered their crane for the unloading and reassembly. Don contacted Bill Barnholdt at STMA and then he met Jim in St. Maries to select a car in decent condition, pending final approval of the donation from the corporate office. They selected STMA 533, a former MILW flat car #59706 built in 1941, primarily because the truck castings still bore the initials ‘CMStP&P’.

A few days before Christmas, 2009, it all came together when STMA 533 was trucked in by Frank Buell, and Bennett employees Ed Katus, Jeff Iverson, Dean Beyers, and Carroll Stephenson reunited the car and its trucks with the rails. Now it awaited only a final ride on the W & I rails to its new Potlatch home.

(The STMA owned 476 flat-converted-to-log cars. The HPG saved one car and alerted the City of St. Maries, which promptly saved one more. The other 474 cars were scrapped at a value of $3,000 each.)

It wasn’t until after New Years that W&I GP-30m #20 made it way up the line to the Bennett mill. The crew coupled their engine onto the old log car, and to a center-beam flat that had just been loaded at the mill, and headed west. Arriving at Potlatch, the engine stopped short of the switch to the old house track and uncoupled. Then, with a chain and a pickup truck, the crew towed the log car off the mainline and up behind the depot annex building. Although the log car probably never visited Potlatch before now, and there are no current plans for its restoration, now it is preserved and makes a fitting addition to the HPG collection.