When the nonprofit Washington, Idaho & Montana Railway History Preservation Group (HPG [now known as WI&M RY.org]) was in its infancy, aspiring author and HPG board member, Tom Burg, would ride the rails from Wisconsin to Spokane once or twice each year to research what would become the WI&M history book, “White Pine Route”. HPG officers Barb and Jack Coyner, Don Somers, or Jim West would pick him up, put him up, and drive him around on his fact-finding missions.

It was during a drive back from St. Maries, ID that Jim told Tom how the outdoor Fiddle Contest in Potlatch had been cancelled due to rain. Tom said he’d seen flat cars used as a stage in city parks in some towns and he thought maybe the boxcar parked behind the Potlatch Depot could function as a waterproof stage.

Because of a defective door, that blue boxcar had been given a “bad order” and set out on the Depot’s house track. It was the last Bennett Lumber Products, Inc. (BLPI) Thrall-built, All-Door box car, BENX 182. It was left behind when all eighty-six of its sister boxcars were sold.

As opportunity would have it, Jim and Tom were about to drive past BLPI, between Harvard and Princeton, so they pulled in to ask about acquiring the forgotten boxcar. BLPI President, Frank Bennett, donated BENX 182 to the nonprofit for use as a mobile, all-weather stage, on their Depot property in Potlatch, Idaho.

BLPI also donated $5,000 so the car could be restored to its original “as-built” livery in 2008. Nathan Vowels Painting of Princeton, ID donated the pressure washing. Additional prep work and stencils were applied by HPG volunteers, Don Somers, Jack Coyner, and Jim West. The car was painted at cost by Rez Painting of Moscow, ID. Original theater carpeting was purchased from the Coeur d’Alene Showboat Theater and navy-blue stage curtains were donated from the Troy High School auditorium.

In this renovated condition, the BENX 182 Stage is now available for use by the community for fundraising events, parking lot dances, or by those developing their performing art talents. As donations and funding allow, the BENX 182 will be further renovated into a self-contained working stage, complete with its own electrical board, and stage lighting to complement the sound system funded by the Potlatch Recreation District.

A wide variety of regional talents have stepped from the Potlatch Depot platform onto the BENX 182 Stage. Local entertainers and musical groups are also a regular feature of the WI&M RY.org sponsored “Potlatch Depot History Day and Speeder Rides”, held annually the first Saturday after the 4th of July weekend. 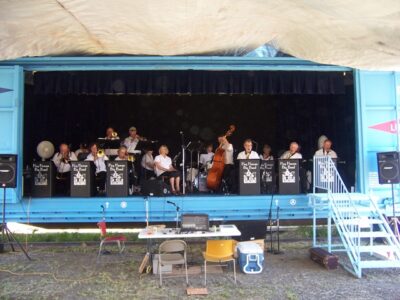