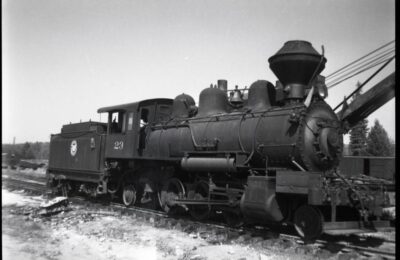 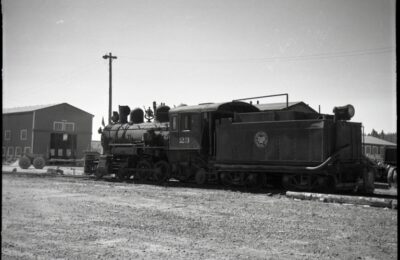 Another Tom Kreutz image of #23, also labeled as taken in August, 1945, shows her at rest at the new Camp 42 shops near Bovill. Notice here that the conical spark arrester has been removed from her stack. 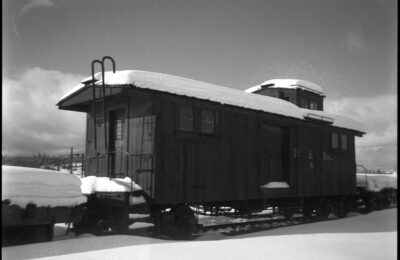 A PFI Caboose at Bovill in February, 1946. Tom Kreutz photo. 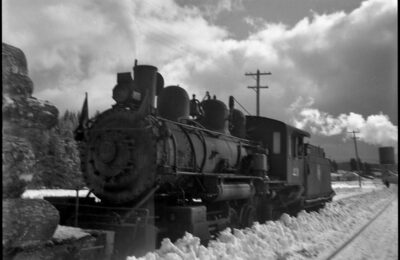 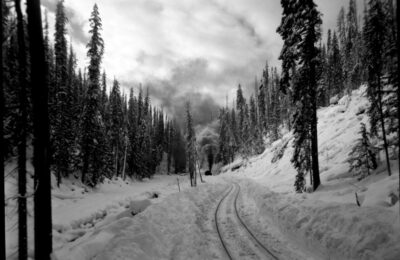 Near Camp 43, which was above Elk River on Deep Creek, hosted an active rail logging operation during winter months for several years after World War II. Here a Shay locomotive makes its way upgrade toward the camp, presumably with a string of empty log flats, in February, 1946. Tom Kreutz photo. 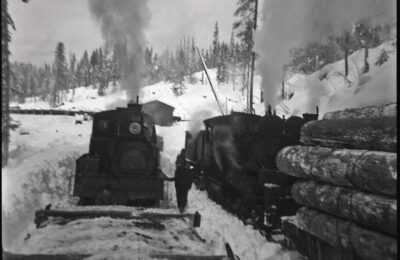 Shooting from the deck of a log car, Tom Kreutz photographed these two PFI shay locomotives pausing alongside each other with their trains at Camp 43 in February, 1946. Examination of other photos taken at the same time indicates that the locomotive on the left is probably number 102, and the one on the right is most likely number 107. 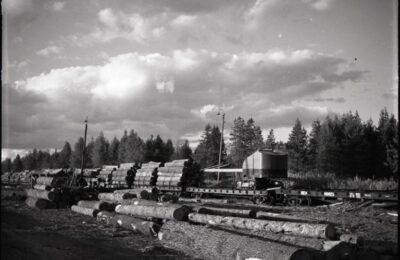 A diesel powered log loader sits on a string of log flats near Bovill in September, 1951. The sheds and platform along the tracks on the left are probably for the log scalers to determine the quantity of timber contained in the logs. Also note that this loader is not the traditionsl “slide ass” type – it has its own set of “caterpillar” tracks. What appear to be planks between the empty cars to the right of the loader are certainly there to facilitate moving between the cars. Also note the use at this time of steel flatcars from neighbor railroads, rather than the company owned truss-rod flats. Tom Kreutz photo.