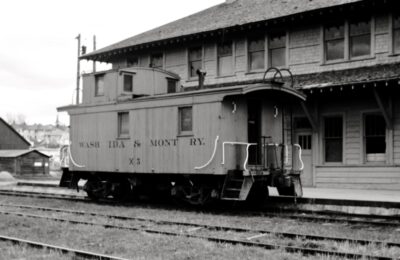 WI&M X-5, a former NP caboose, sits in front of the Potlatch depot in 1968. Not too long after, this caboose was sold and moved to Farmington, WA for use as a pottery shop. It has been donated to the HPG and is now restored on the opposite side of the depot. John Henderson photo. 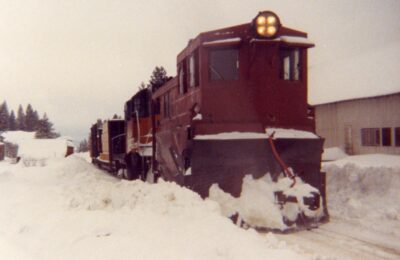 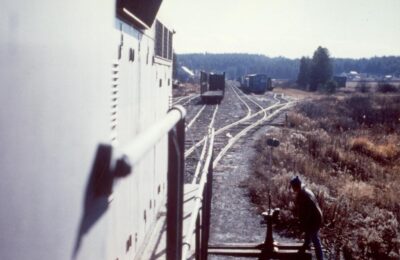 A view from the cab of a Milwaukee Road GP-9 switching the Bovill yard in November, 1978. Even though the WI&M interchanged with the Milwaukee’s Elk River branch at Bovill, the WI&M owned the tracks as far as Purdue, about 2 miles north of Bovill. J. Futterer photo. 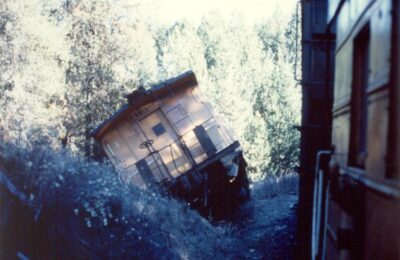 While riding in one of the Milwaukee’s famous rib-side cabooses in November, 1978, the photographer caught a glimpse of caboose 991603 halfway down an embankment after an earlier derailment. Once a regular on the WI&M, the older coupola-style caboose remained in this position for some time. Once rerailed, however, the caboose was never repaired and rib-side cabooses remained in use on the WI&M until the Milwaukee bowed out 16 months later. J. Futterer photo. 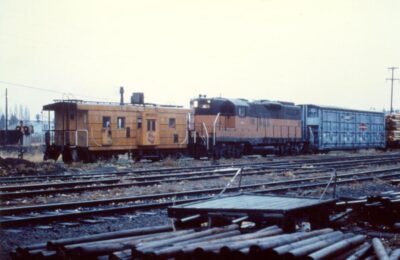 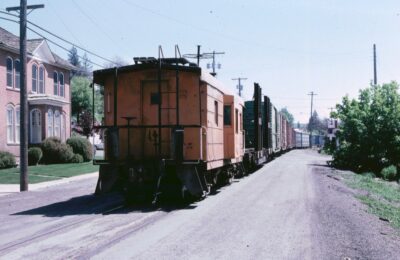 A Milwaukee Road train with “rib side” caboose at the end trundles up Whitman Street in Palouse, WA in May, 1979. Carl Sonner photo. 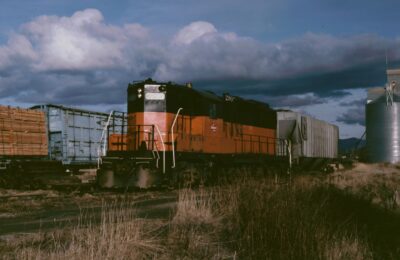 A westbound Milwaukee Road train stops to pick up a loaded hopper at the Princeton, ID elevator. This photo of GP-9 number 290 was taken in February, 1980, just days before the Milwaukee’s official retreat from the West. Carl Sonner photo.