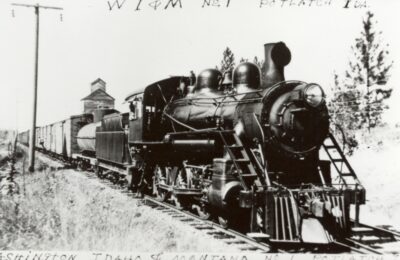 This postcard view shows WI&M #1, and Alco 4-6-0 built in 1906, stopped to switch the Kennedy Ford, ID grain warehouse sometime in 1936. A careful examination of the photo shows a brakeman clinging to the the side of a boxcar. H Luttrop photo, from Tom Burg collection. 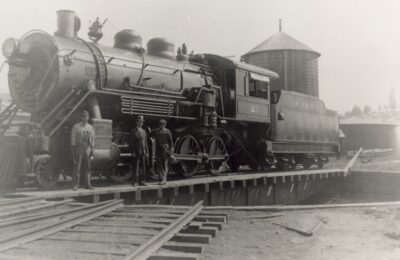 An engine crew and a manager pose in front of WI&M #21, which in turn poses on the Potlatch turntable, in 1941. An Alco 2-8-0, #21 was the real workhorse of the WI&M – a superheater retrofitted to the engine made it considerably more powerful than the other two Consolidation types on the road. Also note the large wooden stave attached to the end of the turntable bridge, indicating it is a manually powered “armstrong” turntable. Al Cowger collection. 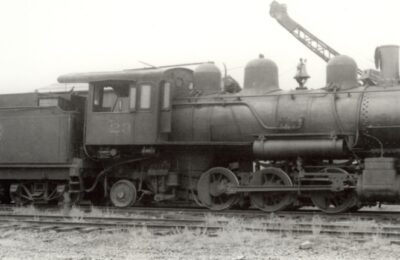 Originally purchased for the WI&M, 2-6-2 #23 was quickly handed over to the Potlatch Lumber Co. after its delivery. Seen here at Bovill, ID in 1947, #23 was equally at home on logging branches or the WI&M mainline; a true Jack-of-all-trades. Tom Burg collection. 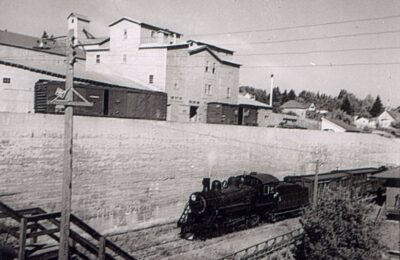 The daily WI&M train arrives at the Palouse depot with at least two stock cars in tow. Two boxcars are spotted at the grain elevator above on a spur served from the Great Northern (ex-Spokane & Inland Empire) tracks. The photo was taken by Don Meinig from the GN trestle in September, 1948. 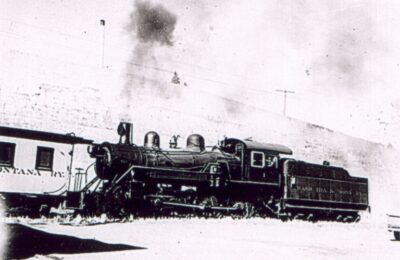 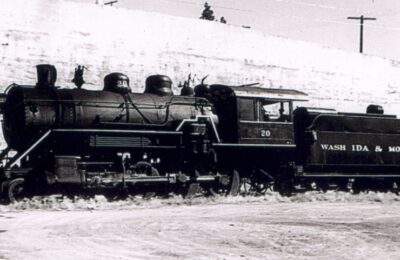 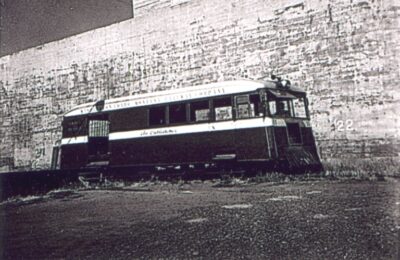 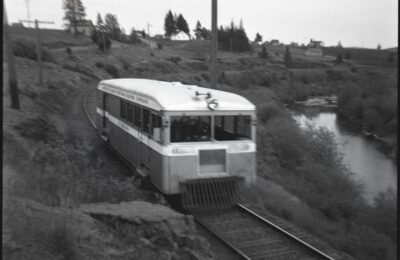 Motor car #11, The Potlatcher, is approaching its destination at Palouse in May, 1944. Tom Kreutz photo. 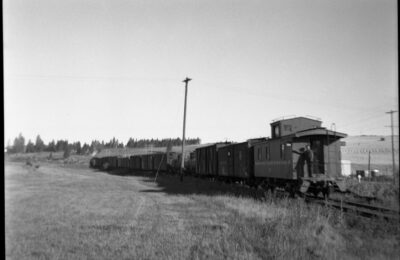 Caboose X-1 brings up the rear of a westbound freight at Potlatch in August, 1944. Tom Kreutz photo. 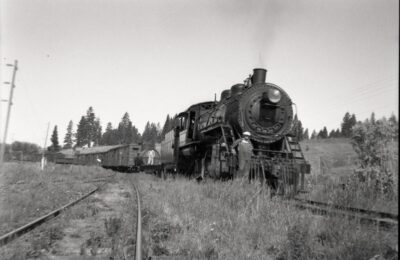 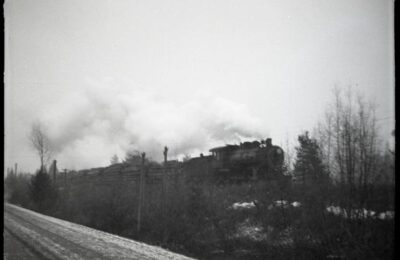 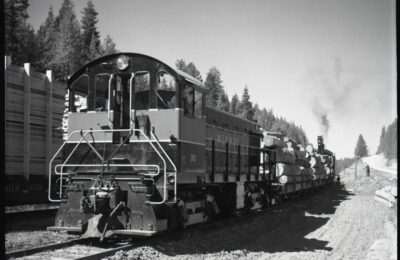 Diesel number 30 pauses while the crews load a log train on the siding at Yale in September, 1951. Twenty four years later, this photo appeared in the September, 1975 issue of Model Railroader magazine. Tom Kreutz photo. 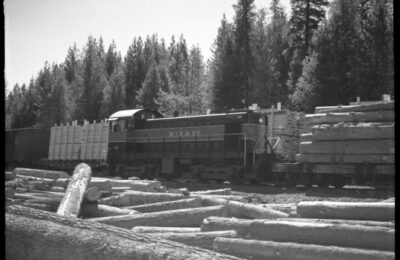 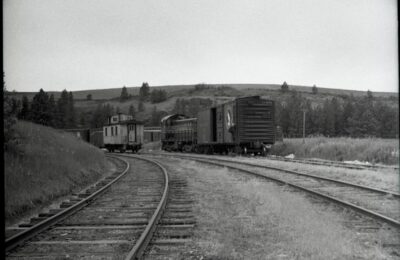 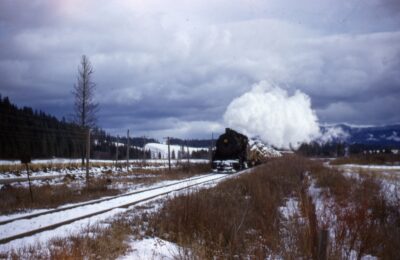 Just west of Harvard, 2-8-0 steams west toward Potlatch with a healthy load of logs in February, 1955. The cold temperatures made for a good looking steam plume. Tom Kreutz photo. 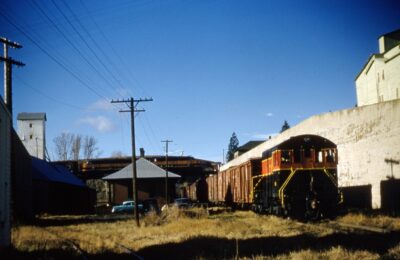 A field day for Alco lovers! At the Palouse depot, HH-660 #66 switches a string of freight out of the interchange tracks. Overhead, a GN freight behind paired FA-1s approaches its own depot in September, 1956. Tom Kreutz photo. 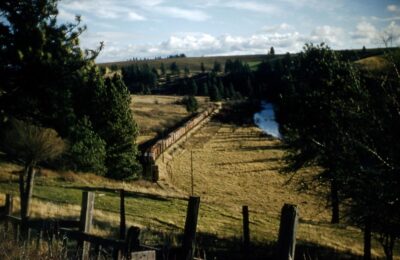 A mile or so east of Palouse, a diesel powered freight rolls east toward Potlatch in September, 1956. Tom Kreutz photo. 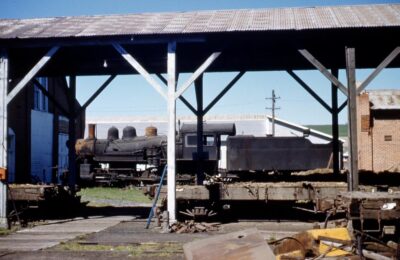 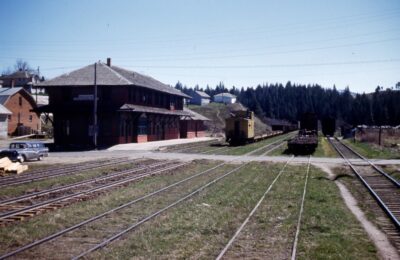 A view of the Potlatch depot and yard taken in 1958 shows one of the former NP cabooses, X-4 or X-5, with a string of cars. Tom Kreutz photo. 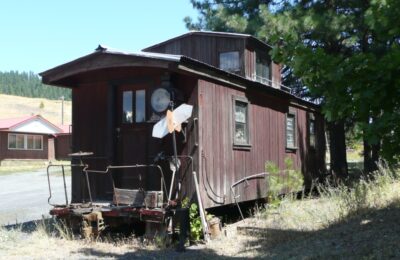 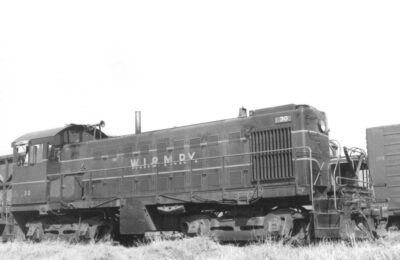 The WI&M’s first diesel locomotive, Alco S-3 #30, rests in the Potlatch yard in August, 1957. This photo, from an unknown photographer, came to the HPG from the Ken Ardinger collection.