By 1905, the Potlatch Lumber Company owned 100,000 acres of timber in Idaho’s white pine belt, the largest remaining stand of virgin white pine timber in the world. Early that year they organized the common carrier Washington, Idaho & Montana Railway Company, and on May 10 it broke ground at Palouse, Washington, to build east into the timber. The site for the namesake company town of Potlatch, Idaho, and the largest white pine sawmill in the world was selected along the route. The railroad reached Potlatch on November 12, and town and sawmill construction progressed throughout 1905 and 1906. The sawmill cut its first board September 11, 1906. 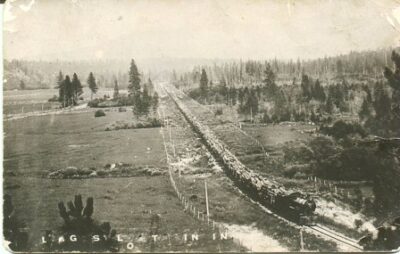 Railroad construction continued through a series of college named towns; Princeton, Harvard, Yale, Stanford, Vassar and Cornell; 50 miles to the end of track at Purdue, two miles north of the new community of Bovill. Soon an agreement was reached with the westward building Milwaukee Road, which built a branch from St. Maries on its mainline to a connection with the WI&M Railway, and on to the new town of Elk River, where the Potlatch Lumber Company constructed a second sawmill. 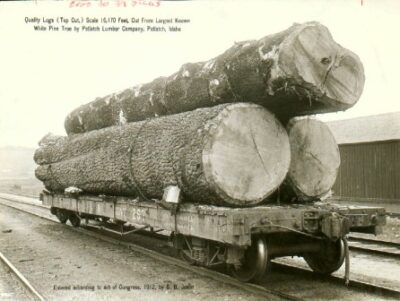 Rail logging operations of the Potlatch Lumber Company’s spurs and camps interfaced with the WI&M to bring logs to the Potlatch mill, and cut lumber to trunk line connections with the Milwaukee, Northern Pacific, and Spokane & Inland Empire. The presence of the WI&M spurred settlement of the area, and the railroad became the settlers’ lifeline. Shay locomotives worked the logging lines and Alco ten-wheelers and consolidations handled mainline freight and passenger traffic. The teens and twenties were prosperous times for the railroad, though business always fluctuated with the ups and downs of the lumber industry. 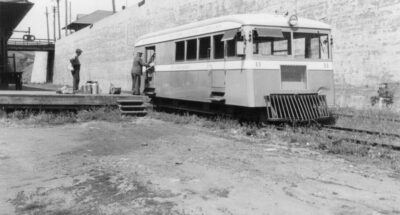 By the 1930’s passenger traffic dwindled, leading to the creation of the “Bug” railcar to carry mail, express, and the occasional passenger. When the Bug wore out, the railroad’s signature piece of equipment, “The Potlatcher” railcar, came from Fairmont Railway Motors and replaced it in this service from 1938 until 1955, when passenger service was discontinued. 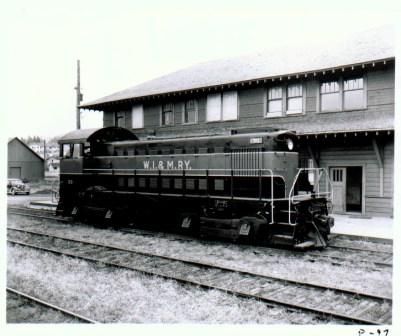 Alco S-3 #30 arrived in 1950 as the WI&M’s first diesel-electric locomotive, with steam held in reserve through the decade. In the 1960’s, Potlatch Forests Inc. (successor to Potlatch Lumber Co.) sought a buyer for the WI&M, and the Milwaukee Road immediately purchased it as a wholly owned subsidiary, operating it with Milwaukee equipment throughout the 1960’s and 1970’s. When the Milwaukee’s Lines West closed in 1980, the Burlington Northern purchased the railroad and operated it until after the 1995 merger that created the Burlington Northern Santa Fe (BNSF). Though the Potlatch mill closed in 1981, forest products from the Bennett Lumber Products at Princeton, and grain from the farms of The Palouse continued rolling along the rails of the WI&M. 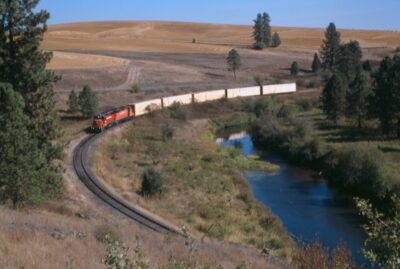 In 1996 a record flood damaged fills and bridges on the eastern end of the line. WATCO purchased the line from BNSF, and as the Palouse River and Coulee City Railroad (PCC) abandoned the line beyond Harvard. The PCC continued operating the WI&M line for about ten years to serve two remaining customers. In 2007, operations passed on to the Washington & Idaho Railroad, which continues serving the Bennett Lumber mill, the lines only remaining active customer.